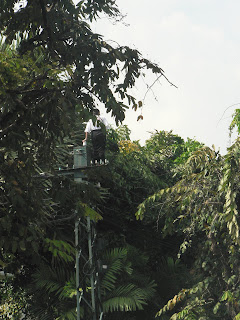 On my way back from a school meeting, I happened to see the young woman posed on the top of the electric pole. I saw her holding a knife which later carelessly fell down and she later broke a lamp of which she used the broken pieces to cut her feet. Too far from her, I only hoped and kept my fingers crossed that she didn’t injure herself too badly. The Cambodia Daily also reported about the incident, and why she climbed her way to the top was explained that when she was angered, she would want to commit suicide. A few similar suicide attempts were made earlier by her, her family said.
I did not want to move closer. Seeing such a heart-breaking situation was already traumatizing for people who really need to get away from sadness like me. That was why I could not bear to get closer or even take a closer picture of the girl. It did draw a large crowd of on-lookers and a congested traffic jam at the scene. What it drew the most within me was the thought that women are usually at a disadvantage any time. They are more susceptible to abuse, discrimination and deprivation of education.
Cambodian traditions seemingly put women in the corner of responsibility only for housework and petty jobs. They are usually restricted to the kitchen, of which a similar proverb is made for. It says, “Women can’t even go around their kitchen.” I always hear this proverb somewhere in Cambodian films or in old people’s conversatins. I can’t translate the Khmer proverb very literally into English. But all I can understand is that it’s to insult women, to confine women to the kitchen premise and last but not least to treat women like ashes with little value, as a kitchen guard. A lot of women have given up their dreams for their early marriage; in fact, women and men need to be equal to contribute to the social development. Men alone can’t make a drop of change without women’s participation.
Surprisingly enough, this suicide attempt was followed by the sheer tragedy toward a prominent female film star (Cambodian). When I first heard about it, I felt sure “It’s just another love-affair-related story or a love triangle.” And her attack was just ‘another statistic’ in the human rights organization and government’s book. But after I read the detail as to what the pepertrator did to the woman, it turned my hair, shocking me souless!!! Nearly 30 cuts by razors blades were left everywhere on her body. The repercussion of someone’s husband’s betrayal turns to another person’s tragedy. It’s until people need to sit down and talk rationally before anger becomes harsh action against people who should not have been responsible for a wrong lust.
Many similar tragetic anecdotes have occurred in Cambodian society. Litres of acid have been poured over a countless number of people because ‘you take my husband/wife, so I have to kill you.” The revenge is sweet and will be taken non-stop if one side doesn’t start doing something first. In some cases, innocent people are victimized because they stand adjacent to someone’s target. These stories have scared me, because I think I can become another victim without even getting involved in their affairs in the first place. It’s making people feel insecure though they are 100% sure they do not do something immoral. Never have I heard the perpertrators have been caught to face trials. Never. I think things can go very wrong. There must be a constant flighting somewhere against violence toward women and innocent people. We need to stop holding a grudge or a violent contempt against other people, in whatever way. If we want peace, prepare for peace.