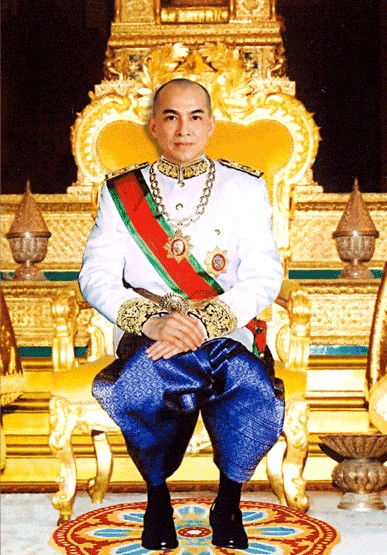 In the aftermath of the elections, many people have spoken about our beloved monarch, HRH King Norodom Sihamoni, in contempt of his abilities of being the head of state. While some have said that he wilfully sided with the ruling party, others have stated that he remains a feeble shadow of his father and is not strong enough to stand up for what is right.
While I certainly do not have any credentials to judge the contents of these comments made by several prominent thinkers and intellectuals in our society, I would like to say that our King has fulfilled his duties as a true constitutional monarch. Ours is a constitutional democracy, where the constitution, the law of the land, is supreme. The institution of monarchy derives its legitimacy and power from the constitution which reflects the will of the people.  The King is a symbol of this very institution of constitutional monarchy, whose mandated role is that of the supreme arbiter for the regular execution of public powers, by which he reinforces the structure of constitutional delegation of powers to the three arms of the state – the legislature, the executive and the judiciary.
Those who have remonstrated with the King to intervene in the electoral process following the declaration of the election results and later chided him for not capitulating to their demands either have no understanding of the supreme law or have no respect for the democratic process, for what they are seeking is a return to a system of rule by men, rather than the rule of law. There is a great deal of difference between seeking genuine institutional reforms, and attempting to undermine the constitution and the monarchy by asking the King to overreach his constitutional bounds.
With the passing of our erstwhile monarch, supposedly the last of the Angkorean God-kings, a new era of constitutionalism has dawned on Cambodia, and we should be all the more glad for making this transition.
Long live the King!
This post has been made in defense of the King and the institution of constitutional monarchy.
Kounila Keo
(Inputs by: Anirudh Bhati)