A few days after the installation of the water pipes across my family’s pond, things began to cool down. But the vivid pictures of people behaving as if they had been a giant grabbing us in their hands stayed within my mind. I remember thinking that these people are like me; we have the same needs for survival. But why do we make war to only have short-term/selfish peace within their own family?
Do not get it wrong that I am still darn angry with them. I’ve just been puzzled or else bewildered by the way they behaved to other human beings. The truth is the way they behaved made me feel insecure about how I will ever survive here if I don’t submit to their needs and wants. What if I had nothing to submit to their greed? Would I be kicked to another dark corner, looking at them hugging themselves with joy over others’ suffering? It’s said that if you give people an inch, they will take a mile. Yes, we did give in at first. We thought that they would take just this, but they’d taken more than they were supposed to.
My parents, whereas, sought help from different sources. Their last answer was to ask my father’s older brother for help. He brought along a friend, a high-ranking official (two-starred general) to our house and chatted for some hours. 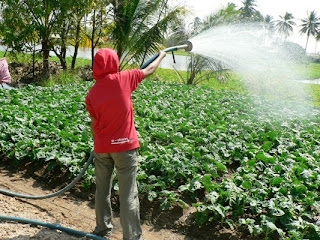 My mother said they did have a pleasant chat about the problems, and she did feel hopeful to win afterwards. The day before, the two district officials who cited my mother to file a counter-complaint pressured my mother to slip a rather huge sum of money under the table. In relation to this, days before my mother was cheated to sign a permission letter to let them install their pipes, the same officials came to my home and pestered my parents every day. Can you imagine what a headache to have someone come ask for money with threats every day? Doubtless, I was really annoyed though I wasn’t there. There were many sleepless nights my parents went through.
In such an argument, nobody wins but the officials. They threaten you, they console you, they even entice you into giving some money to them or others. Most likely the money ends up in their pockets. And nobody gets anything but hatred toward each other as till one point each would be willing to give as much as they can to satisfy their anger. In this case, those district officials’ role was adding more fuel to the flame of each side. But fortunately, the flame was put out on time.
My parents told me the day after the high ranking official my uncle brought with, there was quite a big unrest inside the district. I later found out that the official who came was a close friend of the district governor (not the deputy one). The governor made big noises all through walkie-talkie sets, blaming all who got involved in the case. The day after, the men who got themselves into trouble called my parents, offering apologies. The deputy governor who threatened to bring along a truck of military police also had trouble. Another official who was the other people’s side but nice to us phoned to say that he wanted to make friends with my parents. After several days, things were turned up and down. Enemies became friends and friends became closer friends.
I’m happy my parents have gotten over this, but I was left bewildered. My uncle asked if the high ranking official wanted some money for his transportation/gas; the man said he didn’t since he could vicariously feel our suffering and back-breaking job as farmers. I have a big question popping up on my forehead. How many families could get as good luck as this family, having someone powerful behind their back to help them get through difficulties? Well, maybe because it’s clear that we have 100% injustice from the first rule of the deputy governor, we deserve help and support from that man.
For me, I want justice before the court of law. I want every case to be legally settled because this could mean, it will serve as an example to other people who want to cause trouble for others. And, we all want equality, transparency and justice. My parents were asked not to file any complaint. It was unnecessary to file a complaint? I’m losing hope to change. Now ‘good’ is mixed with ‘bad’ and vice versa. You can never be sure if you fall a victim tomorrow until you get up the next morning only to find half of your house is gone. You realize that ‘corruption’ and ‘nepotism’ are inseparable elements in this society and that once or twice in life, you can’t escape this but adapt to this. Sad, huh? If you are lucky enough, you might not have to spend much money but pay an enormous amount of respect for that someone. Yet, at least, justice is returned; however, it doesn’t make all the people involved clearly see that justice is for public in general, not for elites.