Crocs were born of the economic boom. 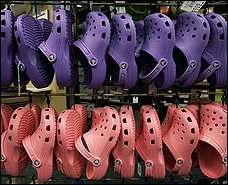 The colorful foam clogs appeared in 2002, just as the country was recovering from a recession. Brash and bright, they were a cheap investment (about $30) that felt good and promised to last forever. Former president George W. Bush wore them. Aerosmith lead singer Steven Tyler wore them. Your grandma wore them. They roared along with the economy, mocked by the fashion world but selling 100 million pairs in seven years.

Then the boom times went bust, and Crocs went to the back of the closet.
The company had expanded to meet demand, but financially pressed customers cut back. Last year the company lost $185.1 million, slashed roughly 2,000 jobs and scrambled to find money to pay down millions in debt. Now it’s stuck with a surplus of shoes, and its auditors have wondered if it can stay afloat. It has until the end of September to pay off its debt.
“The company’s toast,” said Damon Vickers, who manages an investment fund at Nine Points Capital Partners in Seattle. “They’re zombie-ish. They’re dead and they don’t know it.”
Two summers ago, Nancy Fisher of the District bought two pairs of Crocs, one green and one pink, for her daughters. The girls, now 8 and 12, wore them constantly and even got charms to decorate the tops. This year, the shoes are forgotten.
“They were their go-to,” Fisher said, “and now they’re just really interested in flip-flops.”
The story of Crocs mirrors the country’s tale of economic expansion and contraction. At the height of the real estate market, in 2006, the company sold shares to the public, raising more than $200 million in the biggest stock offering in shoe history. It ramped up manufacturing to keep up with demand, only to then find that shoppers were snapping their wallets shut.
Rachel Weingarten, a trend and marketing expert, has relegated Crocs to the wasteland of the comfort-shoe aisle. Maybe in a decade nostalgia will set in, said Weingarten, author of “Career and Corporate Cool.” Then a pair of hot-pink Crocs dug from the back of the closet might inspire misty-eyed memories: “Remember when we had ugly, Flintstone-looking feet?”
Crocs not only had a look, they had a story. In 2002, three longtime friends from Boulder, Colo., got hold of technology developed in a Canadian laboratory in 1999 that created a lightweight, antimicrobial foam. They called it Croslite and molded it into a boating and water-sports shoe they named “Beach.”
The shoes quickly developed a following among landlubbers as well. Gardeners touted their stability, runners enjoyed their light feel, and the chairman of the company’s board wore them with his tuxedo.
The company used money from its public stock offering to diversify and acquire new businesses, such as Jibbitz, which makes charms designed to fit Crocs’ ventilating holes, and Fury Hockey, which used Croslite to make sports gear. It built manufacturing plants in Mexico and China, operated distribution centers in the Netherlands and Japan, and forged into the global marketplace. More than half of Crocs were sold outside the United States.
Then, chief executive John Duerden wrote in an e-mail: “the industry was taken by surprise by the severity of the downturn. It affected us more than most because the brand had been gearing up for a continuation of the extraordinary growth in the prior years.”
But the shoes were hitting a saturation point; the problem with a nearly indestructible product is that shoppers rarely need to replace it.
A foray into Croslite clothing in 2007 fell flat and was quickly scaled back. The company liquidated Fury Hockey last year.
“They had added a huge amount of infrastructure to meet this demand going forward,” said Jeff Mintz, an analyst with Wedbush. “Demand fell off, and they had way too much capacity and way too much supply of product.”
Who needs a second pair of Crocs in a recession, particularly when the first pair is holding up just fine?
The company swung from a profit of $168.2 million in fiscal year 2007 to a loss of $185.1 million last year. In its annual report, Crocs said that an independent auditor expressed concerns about “conditions that raise substantial doubt about our ability to continue.” Its stock price has plummeted 76 percent.
Five months ago, the company announced that it was replacing chief executive Ron Snyder, who went to college with the company’s founders, with Duerden, an industry veteran who ran a consulting firm focused on brand renewal. Duerden believes there is life yet in Crocs and plans to market them to caterers, medical workers and people with foot problems. Actor George Clooney has promised to work with the company, Duerden told analysts. Maybe he could wear a red pair.
“The bottom line is, people talk about Crocs,” he said at a conference with analysts. “They either love them or hate them, but it’s in the vernacular.”