Guest Post
A Preamble of a Constitution is an introduction to the basic principles and purpose of the state.  It also reflects the will and the aspirations of the people of a country.  The Constitution of Cambodia was written by the Drafting Committee of the Constituent Assembly which resulted from the 1993 general election organized by the United Nations Transitional Authority of Cambodia.

WE, THE PEOPLE OF CAMBODIA

Having known grand civilization of prosperous, powerful and glorious nation whose prestige radiates like diamond,

Having endured sufferings and destructions and having experienced tragic decline in the course of the two decades,

Having awakened, stood up with resolute determination to strengthen the national unity, to preserve and defend Cambodia’s territory and its precious sovereignty and the prestige of Angkor civilization, and to restore Cambodia into an “Island of Peace” based on multi-party liberal democratic regime guaranteeing human rights and respect of law, and responsible for the destiny of the nation always evolving towards progress, development, prosperity, and glory,

WITH THIS RESOLUTE WILL

We inscribe the following as the Constitution of the Kingdom of Cambodia:

“We, Norodom Sihanouk Varman …, King of Cambodia,…grant to Our people, …

The second constitution of 1972 was a result of the 1970 coup d’etat orchestrated by the military commander General Lon Nol and Prince Sisowath Sirik Matak against the reigning monarch Norodom Sihanouk.

The third constitution of 1976 replaced the short-lived document from the Lon Nol regime.  The Kampuchean Red Revolutionary Army displaced the US-backed regime in Phnom Penh and established the state of Democratic Kampuchea.

“On the basis of sacred and fundamental desires of the people, workers, peasants and other labourers as well as those of the fighters and cadres of the Kampuchean Revolutionary Army, […] the Constitution of Kampuchea states: […]

The Kampuchean United Front for National Salvation (KNUFNS) and the Vietnamese army liberated Cambodia from the genocidal regime of the Khmer Rouge and 7 January 1979 was declared as the National Day of Liberation.  The fourth constitution of 1981 renamed Cambodia as the “People’s Republic of Kampuchea” and established a model enshrined with Marxist-Leninist characteristics fashioned on the Vietnamese socialist model.

“Throughout thousands of years, the Kampuchean people have struggled to build and defend their countries of which the Angkor civilization is proof and pride.  But they never enjoyed the fruits of their labour […] under the oppressive yoke of regimes of slavery, feudalism, and imperialism […] the People’s Republic Constitution is the result of long struggle […] reflects the will and objective of our entire people to firmly defend national independence and to build the fatherland, which is gradually advancing toward socialism […]” 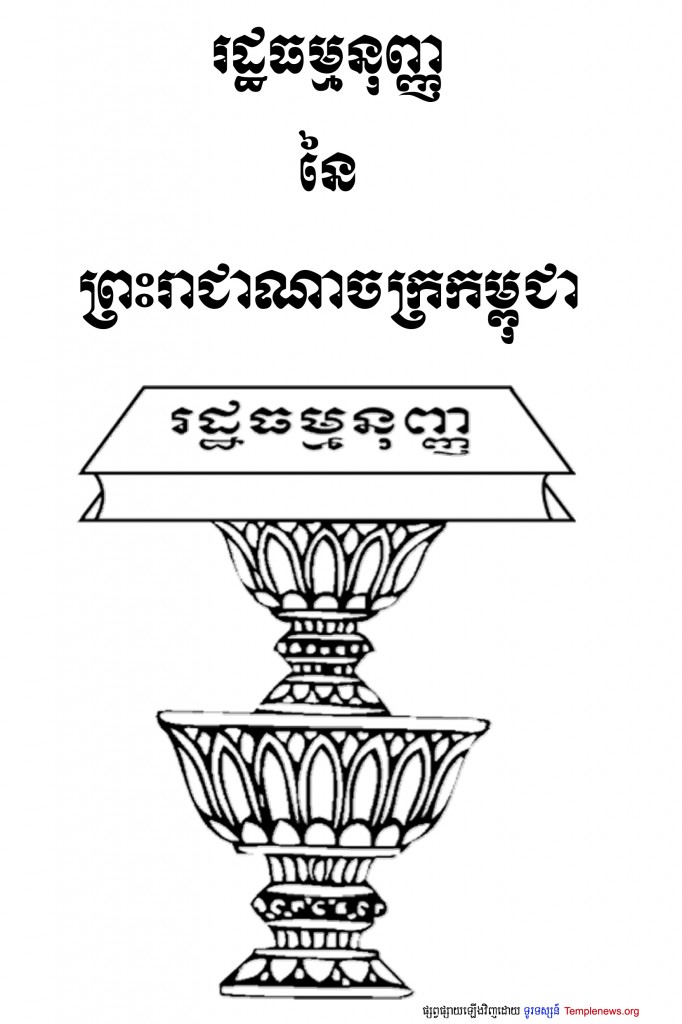 As the Soviet Union disintegrated and the Cold War came to an end, the Communist Party refashioned itself into the “Cambodian People’s Party” and substantially altered the 1981 constitution while renaming the country as the “State of Cambodia”.  The new constitutional text emphasized a free market economy and this represented a significant paradigm shift.
The Paris Peace Agreements of 1991 resulted in the creation of the “Supreme National Council” (SNC) and the “United Nations Transitional Authority of Cambodia” (UNTAC) whose mandate was to organize a general election for the creation of a Constituent Assembly that would draft the newest Constitution of Cambodia.
The present Constitution of the Kingdom of Cambodia is the sixth constitution and has been amended seven times until 2010.  It declares Cambodia as sovereign and independent, and lays down the structure, powers and functions of the three arms of the state.
This blog post has been inspired by an article written by Dr Hor Peng, the rector at National University of Management and former Professor of Law at the Royal University of Law and Economics (“The Modern Era of Cambodian Constitutionalism”).  The article has been included in a book published by Konrad Adenauer Stiftung (KAS), a German political foundation, titled “Introduction to Cambodian Law“.  KAS is affiliated with the Christian Democratic Union (CDU) of the Federal Republic of Germany.
Guest blog by Anirudh Bhati

2 thoughts on “Preamble to the Constitution”