A youth festival held last Saturday and Sunday in Prey Veng province was organized by Youth Council of Cambodia to raise youth’s awareness of democracy and job market in Cambodia, Mao Puthyroath, director of YCC, said on Sunday.

Around 7,000 Cambodian youth participated actively in the event for the two days, she said. “It has been a more successful program so far, and our sixth time we’ve set out to the provinces was very impressive,” she added.

About 40 booths representing different NGOs were set up to inform the young people there about different topics concerning preparing for jobs, encouraging public debates and leadership, and understanding democracy, said YCC director.

The event was sponsored by the International Republic Institute (IRI) partnered with the US agency, USAID, for 90 percent while the rest was supported by two private companies, said Matt Lakin, IRI officer.

Whereas, all the participating NGOs were in agreement with YCC to provide something for youth to learn and show off their products and services respectively without payment, according to YCC director.

“Our objective is to engage as many youth as possible and expose them to democracy,” said John Willis, Resident Country Director of IRI, on Sunday.

“I’m very impressed with young people here who joint the public debates about democracy and leadership,” he added.

16-year-old Sak Srey Roath who competed in the public debates was excited about the first event in Prey Veng. “This is my first experience to see such a great event; it gives me freedom to think and express my ideas,” she said.

Sak Srey Roath was considered as one of the best youngest speakers in the debates although she lost to the young boy who could attract more listeners to his topic than she did.

John Willis commented that the event aimed at giving more chances to enthusiastic young people residing in provinces and a lot of good responses from the youth were given.

“These young people are great talents for the country and leaderships that haven’t been discovered,” he added. 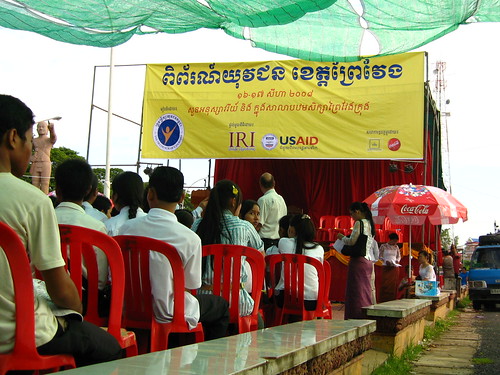