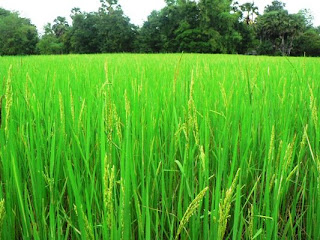 Juggling between school and work, I learn to compromise and weigh in on pros and cons of both sides. Always, a student’s life is crazy busy (just like a busy bee) and academically focused while the work life is quite the same but different in one way: travelling and wordly-knowledge absorption or accumulation. I don’t prefer either of them but adore and equally value both of the academic ways!
For four days, I was assigned to do some reporting for a big international organization. Although I was not quite assured it would be little or much work, I accepted the offer without complaint, hopped on the car and off I went into the world that not many city dwellers know. I had butterflies in my stomach that I wouldn’t be able to do the work because I was so new to it (meeting different social organizations in each of the four provinces and reporting about their work). I was just like a cat on hot bricks, trying to grasp as much I could during my time there.
The rural views I travelled past were breath-taking, stunning, ravishing. I couldn’t explain how much I wanted to be so close to nature. In spite of lack-of-development looks, the countryside is the place many retirees have a strong passion to vacate in. The air is so clean and fresh. I shouldn’t forget to tell about the tattered houses or huts villagers (shacks) tried to cram into to avoid cold and strong wind this month. If the life of the villagers were more improved, I’m sure they’d have so much fun and smiles would appear very often on their faces. Not to mention the hygenic situation in the far-away areas, I was informed that it is getting just a little better or not at all in different areas.

2 thoughts on “How can one contribute to social development?”